I want to buy a motorcycle on Craigslist.org, and I want to get an idea of how the used motorcycle market behaves. To that end, I want to make a few specific searches on Craigslist, once a day for a few weeks, and record their results for later analysis. I would normally do this sort of scraping exercise in Ruby with Nokogiri or in Python with lxml, but this is Craigslist, and there are two Ruby gems made just for scraping Craigslist. The first is called Craigslist, and the second, a derivative, is called Craig. In this post I'll discuss the first gem, craigslist. I'm running Linux Ubuntu 12.10, with Ruby 1.9.3.

If it returned a list of cities, as above, then it's working.

This is a huge list, and it's worth taking a moment to compare it to the Craigslist.org homepage to see what we're looking at. 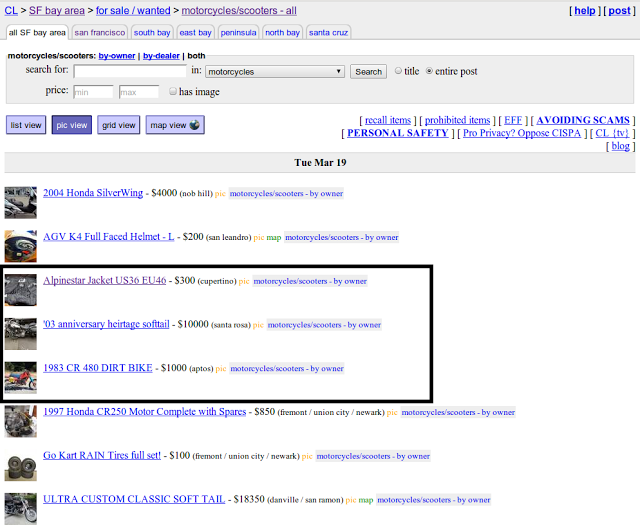 Take just the "A's" from the categories list returned by the craigslist gem and see where everything comes from.

Now let's do some searching through the "motorcycles" category.

This search returned the most recent 3 items from the SF Bay Area motorcycles listing. However, if we look at the corresponding Craigslist.org page, we see something slightly different. The items returned by the craigslist gem are present, but they're not the most recent items. The below image shows a screenshot of the Craigslist.org page, with the items returned by the craigslist gem surrounded by a black rectangle.

I don't know why these don't correspond exactly, but the fact that they don't is something to be aware of.

The craigslist gem Github page has some documentation. But to get a better understanding of what we can do with craigslist, we have to look at the source code. The easiest and clearest way to do this to to read the source code on Github. Here are a few useful pages to look at.

craigslist/spec/craigslist_spec.rb This page is where the author wrote out some tests. This is the easiest code to follow because he writes out in English what each test should do. These tests illustrate all of the methods available in the craigslist gem.

craigslist/lib/craigslist/categories.rb This file contains a Ruby hash called CATEGORIES that gives the associations between the categories as they are written in the craigslist gem and the categories as they appear as Craigslist.org URLs. For example, by looking in this file you can find the category for "motorcycles" (under the "for_sale" heading) and see that the corresponding Craigslist.org URL is 'mca'. craigslist/lib/craigslist.rb This file holds the main logic of the craigslist gem. A glance at the method names shows where the cities, city?, categories, and last() methods come from. Under CATEGORIES on line 49, we can see the build_uri() and more_results() methods, which are called by last(). A glance through last() shows that it builds a Craigslist.org-style URL (e.g. sfbay.craigslist.org/mca) and then uses Nokogiri to parse and return the results. (To see how Nokogiri works, check the documentation or read my blog post about using Nokogiri to scrape a web site.)

That's it. By reading through the source code, we see that the main and only functionality of the craigslist gem is to take a city and category and use the last() method to return some number of recent results from the corresponding Craigslist.org page. No further query methods or refinements are available. For that we turn to another gem, this one called craig, which is the subject of the next blog post.

The craigslist gem has the capability to take a city and Craigslist.org category as arguments, and return a well-structured Ruby array of text scraped from the corresponding Craigslist.org page. The main and virtually only functionality is as follows:

It is a robust but limited gem. Query refinements are not possible, and further processing or analysis of the returned values is done outside the craigslist gem. Thanks are due to Greg Stallings for his work on the gem, and for releasing it as open source.